The next part of the journey passed in a bit of a blur. Simon was preoccupied. He was analysing events and coming to a realisation. At some point, there would be a “ching.” He thought about Old Man Willow and his song. Once, that dimension had been a wonderful place to live. Now its inhabitants must live in fear and tyranny. Walking on the grass brought a penalty of death, how could people live like that? Yet it was a world where Law ruled, not Chaos. Jhamed had once said that Hitler represented Law. Simon had wondered then whether that meant Churchill had represented Chaos. He realised that it wasn’t a case of black and white; everything was shades of grey. For society to be successful and fair to everyone it needed a balance between Law and Chaos. Law didn’t represent “good”; it stood for order. Chaos didn’t represent “evil”; it symbolised anarchy. Churchill didn’t support anarchy; he battled for balance. Democracy, for all its faults, was an attempt at securing balance. The fanatical religious zealots in his world, whether they were fundamentalist Christians or Jihad Islamists were just two different faces of absolute Law. If that were the case, then where did evil come in? Which side did Gadiel favour? All humans, and he supposed all elves and dwarves too, were born with the capacity for both good and evil. Evil was not restricted to either Law or Chaos, it was all pervading. Ching. Everyone had a choice. Hitler probably wasn’t totally evil. Churchill must have had some evil in him. Was the bombing of Dresden really necessary or was it just an evil act of revenge? The victors write the history books and take the moral high ground. Everyone has a choice. He had a choice. I will take up the Sword. I will use it only for good. I will use it to serve the Balance.

Simon wasn’t sure how much time had passed while he had been cogitating. He was vaguely aware of them walking long distances over a variety of terrains and in a range of weather conditions. It appeared that few realms enjoyed perfect weather. Strange how the Law dimension had the best weather. I wonder whether it was a coincidence or if their control extended that far? They had also sat around for long periods while Jhamed had scouted ahead. His companions had respected his need to think and had not disturbed him. Jhamed, no doubt, had seen it all before. Taran was naturally perceptive about such things. Dawit appeared to be lost in his own musings.

Simon felt a great relief. He had come to a decision. He would take control of his own life. He was not a pawn of fate. He sighed and relaxed. Unbidden, words and images came into his mind. He saw the visions again from his dream. You are close. I can feel you. Come for me. We will be reunited. The Trinity will be renewed. Be careful! The witch is strong. She is stronger than I am. She is stronger than you are. Together, we are stronger than she is. The Trinity will be renewed. Soon we will feast. Simon felt gnawing hunger. It was unlike anything he had ever felt before. The tiny red hairs on his body stood on end as he shivered.

Jhamed returned from a scouting mission. Simon took him to one side. “We're close, aren't we?”

“How do you know?” Jhamed asked.

“The Sword has spoken to me.” Simon recounted his dream and his recent communication, all except the gnawing hunger. “I think I understand about the Balance now. I am ready to take up my Sword and serve the Balance.”

“Excellent!” Jhamed smiled. “I love it when a plan comes together. We’ll rest here tonight and a couple more portals will get us to Dishley tomorrow. We’ll need a plan to tackle the witch.”

They were in a dimension where either Chaos or Sergeant Pepper appeared to be in control. They spent the night sheltered under tall, purple-leaved trees. A full green moon cast an eerie light that battled with the red glow from their fire. The resulting yellow light illuminated a number of inquisitive forest creatures which came to stare at the travellers. They looked like some form of lemur, except that they had two heads, which continually chattered and tried to pull their body in different directions. At one point they started and rushed off back to their burrows or up into the trees. All except one, which hid by the travellers’ packs. The cause of their alarm sauntered into view. It was white, albino perhaps but there was not enough light to tell for sure. It was as big as an elephant, but it more closely resembled a lion. Its huge, shaggy head had a gaping maw, filled with razor sharp teeth. This was a predator close to the top of the food chain. I hope it’s not hungry, or we will be on its menu.

Taran and Dawit were on their feet in an instant. Taran notched an arrow to his bow. Dawit wielded his axe. The elephion sniffed the air, stopped, and looked at them. It stood tall and let out a roar that would have done the Melbourne Cricket Ground proud on Grand Final Day. All the night noises of the forest stopped. Simon stopped breathing. Taran made ready to loose his arrow. The creature gave them another disdainful look and then sauntered off. Simon released his pent up breath. Phew, that was close, must have already eaten. The two-headed lemur-like creature chattered excitedly to itselves and helped itselves to some biscuits from one of the packs.

Dawit and Taran took turns to keep watch. They insisted that Simon and Jhamed sleep since they were unarmed and would have a big day ahead of them. Simon slept fitfully. His dreams were full of hideous crones with black cats and ravens. The witches stirred huge cauldrons and concocted potions, which they force-fed him to make him reveal the location of his Sword. He tried to refuse, but they were truth serums and he could not resist. The witches found his Sword and used it kill all of his friends. The Sword ate their souls and then the witches ate their bodies.

Simon woke in a cold sweat. The moon had gone. Jhamed was snoring softly and the fire was low. Reflected in the faint firelight, Simon saw four eyes watching him. They were small, yellow eyes; animal eyes, yet they shone with the fiercest intelligence that he had ever seen. The two-headed lemur creature had seated itself on the group’s food and sat watching Simon. Simon deliberately blinked his eyes to try to clear them of sleep. He could have sworn that the creature had winked at him, with both heads at the same time. If I didn’t know better, I’d reckon we’d all taken LSD or something. The creature chattered to itselves. Words formed in Simon’s head. Remember Vasek. Only Vasek can control the Sword. Beware Fleischaker! It consumes the souls of friends as well as enemies. The two-headed lemur creature gave him another two winks and skittered off into the forest. Simon slept again. When he awoke, he wasn’t sure whether he had dreamt everything. 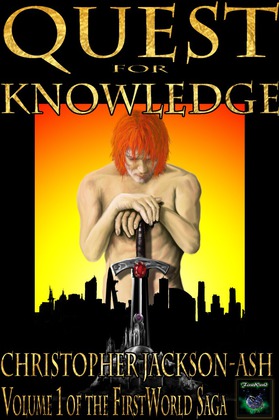 “When the two who are one Return to the sun When the flame-haired child Is first become While the guardians sleep...