Not Every Love Story

Mind if I think out loud about love and writing?

A very strange thing is happening this year. Last year, I wrote and published a number of books. This year, all I seem to be able to do is write half-novels because I start something new before they are finished.

In just two years, I wrote and published a three book series, two novellas, and a novelette. I told myself that if I kept putting new stuff out there (different genres and different lengths) eventually I'd hit a chord with most avid readers. I believed that people reluctant to read one of my books would find another of mine that would be more to their taste. That was my plan and I saw it through. But nothing really changed.

During that process, I learned how to focus my efforts on giving readers what they want. I focused on keeping my stories "between the lines", not pushing readers too far outside their comfort zones. It's strange looking back. When Winter Seedlings first came out, I bragged about making grown men cry. I marketed it as a book designed to touch every emotion, twist you up inside until you could never fully untwist from it. Readers would remember it always. These are things I was proud of. But somewhere along the way I became ashamed of this aspect of my writing. I listened when I shouldn't have to people saying they always need a happy ending. I listened when people said they couldn't read my books because they were triggering. I listened and I tried to change my writing, to write less triggering subject matter and inject it with more happiness. The last book I published was The Departed, which was supposed to be a tame and sentimental story. Despite my intentions, The Departed was still considered by reviewers to be a good, yet melancholy work.

It feels good to see a book sell or a review written. I tried to think of a story that would sell even better than Winter Seedlings. I tried to think of a story everyone would want to read but would also be important to the world. My definition of success had shifted from creating a work that is important to a couple of people to actually making a decent profit. From a business perspective, this isn't such a bad focus. Most people can't afford to lose money on their work, and so why would anyone expect that from authors?

As it turns out, I'm terrible at marketing. Making money is just not something I know how to do. It isn't why I started writing. It's depressing to think about it. But we'll leave that as another subject for another day.

Right now, the thing bugging me is how and what I write. I have started six books in four months. I even have one half-novel with 50,000 words. I abandoned it two months ago. Yesterday I stopped working on a 22,000 work in progress that was going really well and out of the blue I started another new story. This is where I tell myself I don't know what the problem is, but I'm lying to myself.

This is the lie I tell: I want to write a love story with a happy ending so people will love it and talk about it on social media. I want to write a love story so I can be in a romance writers' groups and laugh about inside jokes and talk about chocolate and the next hot couple I'm shipping. I want to be able to say "I'm writing about an honestly represented bisexual woman" and have people say "Oh, that is so needed in today's fiction! I can't wait to read it!" And then everyone will read it and love it and I can earn back the money I spent for the cover art.

But this is the truth: I can't write about love like a noun, like people get *it* one day because they deserve *it* and now they have *it* and everything is fantastic. (*it* = love). I don't want to admit to you that I don't believe in *it*. That is a very, very sad thing to have to say, but it's true. I don't believe there is a love that can be given and held onto like a set of milk glass doves. Love is work. It's work that might not feel like work, but it definitely is an action that is performed, not an object that is received. Sometimes love takes place even when it hurts, even when there is no joy, even when the end is near.

"But books are supposed to be an escape from all that misery. Happily ever after can happen in a book and it will feel real and that's why we need these books so much."

I understand. I do. I agree. Please stop beating me up about it (note: I know you aren't beating me up, I'm doing it to myself). If you want happily ever afters, there are entire publishing companies dedicated to giving them to you. Want the romance genre to be more diverse? I would love to help you with that. As a matter of fact, I have tried because I know it needs to happen, I know it's the right thing to do, and I know there are readers waiting.

I don't want to admit to the truths this might tell about my life. But writing any other tale feels like lying.

I have two stories I am actively writing at the moment. One is abstract and hard to keep from derailing. That one is about the space between life and death. A love story was intended to take place in that in-between world, but I am complicating (sabotaging) it by giving my main character some very persistent flaws. It's getting ugly.

The other story, the new one, is meant to be about a woman who leaves a mean boyfriend and hits the road with nowhere to go. She was intended to end up forming a very healthy, loving relationship with another woman she meets miles away. I am 2,000 words in and have already changed the mean boyfriend to a literal kidnapper who has held her hostage for over a year. Instead of meeting a nice person after escaping, she has met her captor's brother who will trick her into being returned to the evil guy. This is what I do to things.

I try to think about what readers want and a tug-of-war happens between one side wanting sweet romance and the other side finding everyday life very dull. My daughter laughed at me, perhaps because of the desperate tone, when I asked if it was over-the-top for me to have my main character searching for loose change in the beat up car she stole and have her end up grabbing a snake.  I explained, "I just don't want the reader to get bored."

Seriously. I can *not* write romance. I give up trying. My books are psychological fiction. They are disturbing but in a very real, get inside the pain of a person, kind of way. I never meant to be Stephen King (and I'm still *not* like Stephen King). But my real life has been something you'd be more likely to find in his books than a romance novel. I'm just writing what I know, what it means to love even when it hurts (the hurt part is the center of my comfort zone).

My writing is evolving. I tried to push it to be sweeter and more optimistic. I tried. I'm not trying anymore. I'd rather write a terror of heartbreak with a satisfactory ending than start writing a hundred books I can't force myself to finish. With the ocean of other authors in the world all trying to write the next big seller, I'm not really needed to pretend to be something I'm not. Someone out there already is what I've been trying to be. (May the universe bless them with recognition.) But no one else in the world can be me. I'm owning it. (Universe, please bless me, too.) 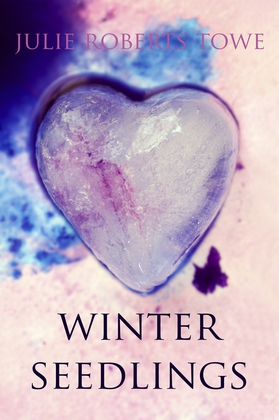 Jute would like to make herself invisible, but she can’t. Instead, she makes herself repulsive, even frightening....