What did Mother Teresa, Fidel Castro and Steve Jobs have in common?

What makes some people so inspiring that others want to follow them? Is it vision? Dedication? A strong personality? Charisma (and what the hell is that anyway)? The answer is: all of these and much more. And the other truth is that those who can raise and lead people may lead them deep into shit creek.

Mother Teresa, the world's most well-known nun, after seeing extreme poverty in the streets of Calcutta in 1950 spontaneously started to help starving and ill people. Soon, followers joined and formed the Missionaries of Charity order, which now consists of over 4,500 sisters and is active in 133 countries. But what is it that inspires thousands of women to give "wholehearted free service to the poorest of the poor", probably the most inglorious work in the world?

Mother Teresa achieved it not only by making herself a great example of dedication, but also by constantly focusing on others, actively supporting new novitiates and making an effort to get to know each of her people's strengths and needs, listening to them and helping them grow. Mother Teresa also wasn't creating huge, complex ideas: she was "completely focused on helping one person at a time."

The founder of Missionaries had habits shared by many great leaders, explored and exemplified by Gordon Tredgold in his book "Leadership: It’s a Marathon not a Sprint":

People working in big organizations tend to forget that the woods they walk through consist of single trees. In his book, Tredgold exemplifies this with a moving true story about a parcel delivery company, which tried to solve the problem of delays. The business project manager called a meeting and asked team members why they thought the improvement was important. They answered: to reduce costs... to increase customer satisfaction... to widen the market share... to avoid penalties... and other corporate blah blah blah. The manager said, "This is important because only this way can children receive their birthday presents on their birthdays and not the day after. Only this way can we ensure that people who receive medication have it when they need it, and thus we minimise their suffering."

Well, now we come to the dark side of Mother Teresa's force. As a catholic, she believed that suffering – even when caused by poverty, medical problems, or starvation – was a gift from God. As a result, although her clinics received millions of dollars in donations, their conditions drew criticism from people disturbed by the shortage of medical care, systematic diagnosis, and necessary nutrition, as well as the scarcity of analgesics for those in pain. She was also an anti-abortionist. Richard Hitchens commented, "[Mother Teresa] was not a friend of the poor. She was a friend of poverty. She spent her life opposing the only known cure for poverty, which is the empowerment of women and the emancipation of them from a livestock version of compulsory reproduction."

Leaving you with the question of if her actions did more good than bad, I must agree with Robert Louis Stevenson, who said, “Saints are sinners who keep on going.”

Fidel Castro, who ruled Cuba for half a century and changed it into communist country, is praised by his supporters as a champion of socialism, anti-imperialism, and humanitarianism: "His motivation helped the lower class Cubans raise their level of self esteem. He remained true to his beliefs and values. Most of all he was a challenger; he inspired his followers, took on great responsibilities and showed courage in the face of danger. He never left his followers to enter the battles of war alone." He didn’t relinquish his authority, even when ageing and ill, until the age of 82.

Castro showed other habits of a great leader, as described by Gordon Tredgold:

Fidel Castro might have been a successful guerilla warrior, but his faith in socialism as the cure to all human problems, economic as well, cost his country decades of delay in economic progress. His policies hindered a lot of economic development that could have taken place in the country. With the end of the Soviet Union and its financial support, Cuba now runs mainly on the money coming in from tourism and remittances from exiles; ca. 1 million Cubans have left the country seeking a better life.

The ability to adapt to changing situations was the great advantage of legendary Steve Jobs, co-creator of Apple. People who knew him describe him as exceptional visionary, who not only dreamed big dreams, but also had the ability to visualize and materialize his ideas and to convince people that they would work. "Jobs could see that innovating and introducing unique products which suited consumer needs was the only way to stay ahead."

Jobs was also brilliant in the difficult art of leading people through the processes of change and redirection, motivating them to identify with his vision of the future and work towards that goal, even by sacrificing their self interests. "He could use symbolic and emotional appeals to employees to drive them towards higher efforts and commitment by emphasizing the role they are playing in the future growth of Apple." (Faisalhrguy)

Nonetheless, Jobs made many small, mid-sized and big mistakes both in terms of people and business. His critics mention product and marketing failures, the wrong strategy regarding Pixar, the inability to accept innovation other than his own. His vision seemed to cover the reality sometimes. According to his former business partner Pat Crecine, Steve Jobs was “absolutely single minded, almost manic, in his pursuit of quality and excellence.”

He also once trusted the wrong person, John Sculley, hired as Apple's CEO, who didn't understand its culture and brand, and later on kicked Jobs out. Both Apple and Jobs suffered heavily.

Jobs made mistakes in communicating with staff, treated people badly, had a cult of product secrecy and got into conflicts. Moreover, for several years, Jobs denied paternity of his daughter Lisa, even after a DNA test.

But he was one of those who really changed the world. “Do not follow where the path may lead. Instead, go where there is no path and leave a trail” (Ralph Waldo Emerson).

This quotation can also be found in Gordon Tredgold's book. This book is constructed in a very interesting way: the author analyzes various characteristics, qualities and good habits of successful leaders, referring to his own experience not only in various businesses he worked  with but also in his amateur sports training. A marathon is 26 miles and Tredgold describes 26 important factors of leadership success. “Leadership: It’s a Marathon not a Sprint” is a fascinating presentation for readers interested in both human-business issues and long-distance running.

Download "Leadership: It’s a Marathon not a Sprint” by Gordon Tredgold 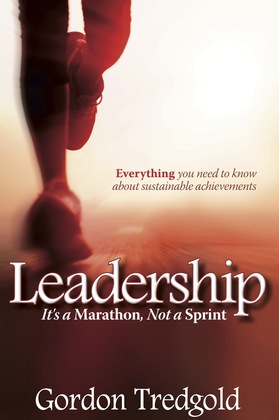 Leadership: It’s a Marathon not a Sprint

Everyone has the potential to be an inspiring leader. Learn how! Simplicity, Transparency and Focus: understand what...