Behind the scenes of Glass Half Full: Our Australia Adventure

Thank you for inviting me to share with you some behind the scenes photographs and stories from our Australian adventure. For those of you who are not familiar with me or my books here is a brief overview (I am not that interesting hence its brevity!)

I have been a Registered General Nurse for 28 years in addition to being a mum, step-mum, wife (3 marriages!) and now independent author with 4 children and 3 step-children. I was born in Ipswich, Suffolk, UK and I am married to Nigel.

We now live in South Wales with our two playful Australian Cattle dogs, Dave and Buster. Since 2007 our lives have been like a chaotic roller-coaster ride and it has taken us across the world. We have lived in two states and one territory in Australia and then in rural South West France before returning to the UK in 2014. These experiences have taken my life from that of nurse and mum to author and advocate for other independent authors, some of who have become ‘Accidental Authors’ like me. Telling our stories, in the form of memoirs, enables us to hopefully inspire and motivate others to pursue their dreams and to never give up, despite the challenges that life presents. 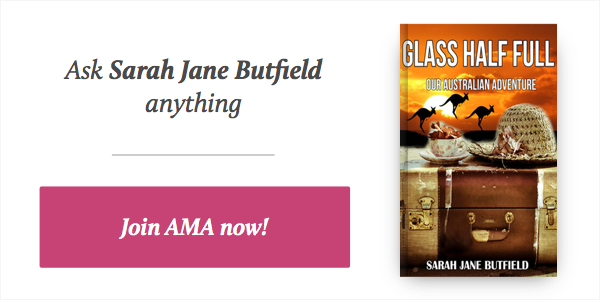 Glass Half Full: our Australian adventure tells our story: a UK family who made one of the toughest decisions of our lives, to emigrate to outback Australia to live the Australian dream. Why was the decision so tough? Well we are a step-family, and leaving meant that some of the children would remain in the UK with ex-partners. After enduring a messy divorce and numerous child custody battles we knew that this was our only chance of future happiness and that as a family we were making the right decisions. We worked and planned hard to make it a success and it was an amazing and fulfilling adventure until fate and life-changing events started to test the foundations of our usually resilient family. Just when we thought the worst was over Mother Nature intervened and washed away the roots to our new life in Australia during the Brisbane floods of 2011.

This was our high-set Queensland house, just renovated before the floods. After the floods the windows and doors had been pushed out by flood water. The fly screens hung twisted and flapping as the breeze wafted through the now empty house. A tide mark of silt around the roof indicated how high the flood water was at its peak. Submerged is the term some people used; breached is the way the emergency services described it; destroyed is how I saw it!

Life is never without its challenges, but how many life-changing events can one family endure before they reach breaking point?

Life in Australia wasn’t all doom and gloom, we lived the dream for a while!

Take a trip to King’s Canyon and Rainbow Valley with me!

"You describe Alice Springs and your outings there in such exquisite detail, I have never been to Australia, and I don't know if I would ever have thought of choosing to visit Alice Springs, but I think I am falling in love with it. I particularly enjoyed reading about your happy times there, especially King’s Canyon, NT." Wendy Newstead

Despite July being winter in Australia there is no respite from the extreme temperatures. Therefore, it was refreshing, and breath-taking to unwind from the car journey in our personal Jacuzzi bath, in our hotel room. The unfrosted bathroom windows overlooked rocky hills and scrubland frequented only by the resident wildlife of wallabies, kangaroos and lizards.

The word paradise can conjure up visions of tropical islands, white sandy beaches, clear blue oceans and ultimate relaxation. However, in the desert paradise comes in a contrasting form. It gives you idyllic seclusion, at one with some of nature’s wildest inhabitants such as dingoes, wallabies and snakes, but in luxurious surroundings. We experienced amazing sights and special moments on this romantic break to King’s Canyon and Rainbow Valley, the memories of which will stay with me forever.

Watch the Glass Half Full book trailer to get a feel for our outback adventure.

Dave and Buster, are Australian cattle dogs and they have been with us since 2008/2009 respectively. They have accompanied us on road trips, numerous adventures in outback Australia and on many wild camping excursions in various states.

In this photograph they are at Mayfield Conservation Reserve in Tasmania, as we explored the beautiful coast line on a weekend break, camping by the beach watching seals and dolphins.

The boys love camping and you can read about Dave's adventures with dingoes, and how we rescued Buster from an RSPCA centre in Chapter 5 of Glass Half Full.

A mother's nightmare relived (In Chapter 12 of Glass Half Full)

As any parent will know, when one of your children is ill, or injured, all you want is to take their pain and discomfort away. The sense of wishing it was you instead of them is overwhelming. In 2010 my youngest daughter Jaime attended a school bush camping trip near Alice Springs and developed an innocuous boil on her knee. Little did we know what would follow and how it would change her life for ever.

Here is an extract from Chapter 12:

The surgeon and his entourage of medical students walked in, and began chatting. I walked to the door to see if the nurse was on her way with the dressing trolley. As I turned to look at Jaime, I saw the surgeon reach for the wound packing; it was as if I was behind glass, unable to be heard.

I was shouting, “Stop no! Please God no!”

Instead of waiting for the nurse to return, with the saline to soak the gauze pack before removal, the wound packing was yanked out.

Jaime hysterical and uncontrollable leapt off the bed, blood spurting from the ripped out IV cannula site. As I reached her, she was curling up in the foetal position on the floor, shaking and screaming. Blood and serous fluid leaked down her leg from where the gauze pack had been removed. The surgical team made a hasty exit, shouting orders for pain relief and assistance, whilst the nurses rushed in around us. I cradled Jaime in my arms, rocking her as if she were a baby until they came with a morphine injection.  I could not let anyone else near her. When the injection started to take some effect, alone I gently lifted Jaime onto the bed. I cradled her, holding so tight, I never wanted to let her go again.

As a result of this experience Jaime developed a condition called Chronic Regional Pain Syndrome. If you would like to know more about CRPS here is the organisation that Jaime belongs to:Burning Nights. However, like her mum she is not a quitter and she went on to attend modelling and deportment school in Hobart, Tasmania despite the physical and psychological scars.

If you would like to meet the rest of my family and find out more about how we fought to keep our Australian dream alive using every piece of positivity available to create new hope and new beginnings then Glass Half Full could be ‘just your cup of tea’ as we say here in UK! 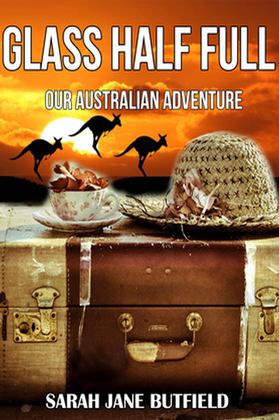 When a UK step-family makes the tough decision to seek a new life in Australia it appears all their troubles are over...