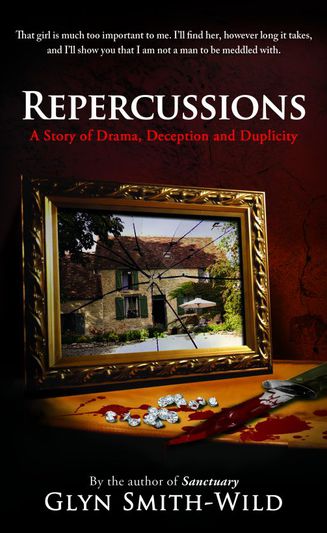 How long can Ben protect Mary from her evil ex?

Repercussions is set in France, and continues to follow the life of Ben Coverdale as he tries to settle down to a comfortable life with his beloved, Mary. However, the past is never far behind and the danger posed by an angry ex' continues to put both Ben and Mary in consistent peril.

Readers of 'Sanctuary' have anxiously awaited the next instalment in the Ben Coverdale trilogy, 'Repercussions', and writer Glyn Smith-Wild does not disappoint. The author is successful at pitting the estimable and honourable Ben against the manipulative and scheming Donald. In a tale that has been told through the ages, at the heart of this struggle is a woman (Mary) who must endure being pulled in multiple directions by the two men. As the cover of the book most succinctly states, this is a story of drama, deception, and duplicity.
What sets this apart from other books of a similar genre is the exacting details as offered by Smith-Wild and the subsequent way in which the reader is thoroughly engaged in the escapades of this threesome. Ben is clearly not only protector to Mary, but also has a vested interest in digging deep to the bottom of what motivates Donald. His rival is interested in Mary not just for pure and romantic reasons, but she is integral to a larger plot that Donald has hatched via his diamond dealings. In fact, Donald is confident that Mary knows a bit too much about his illicit transactions and thus she must be dealt with appropriately.