The new biography of the universe 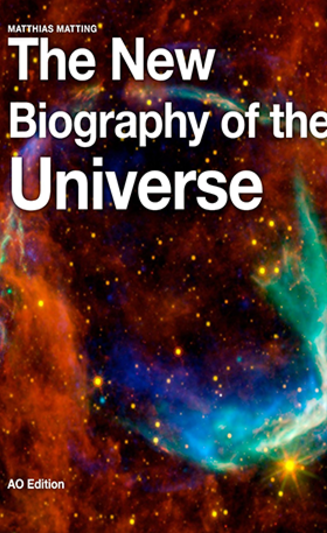 Read Time: 1.0 to 1.5 hours (14195 words)
May I introduce: the universe. Born 13.75 billion years ago. Constantly growing. Nearly empty. Electrically neutral. Poor in antimatter. Populated by 100 billion galaxies, including 130 sextillion stars with approximately just as many planets. Consisting of only 4 percent known forms of matter. The other 96 percent is made up of 23 percent dark matter and 73 percent dark energy. The home of black holes, giant stars, pulsars, quasars, galaxy clusters, and nebulas - as well...
Read full description
19 Readers
2 contributors
Download
$ 3.99 Recommended price Pay what you want

Download the book: The new biography of the universe

Download the book: The new biography of the universe

May I introduce: the universe. Born 13.75 billion years ago. Constantly growing. Nearly empty. Electrically neutral. Poor in antimatter. Populated by 100 billion galaxies, including 130 sextillion stars with approximately just as many planets.
Consisting of only 4 percent known forms of matter. The other 96 percent is made up of 23 percent dark matter and 73 percent dark energy. The home of black holes, giant stars, pulsars, quasars, galaxy clusters, and nebulas - as well as lifeforms such as humans.

Where did the universe come from? What were the conditions at its birth? What amazing processes have been taking place since then? When and how will it die? What science knows about these things has changed dramatically in recent years. Let yourself be taken away into a world that goes beyond everything imaginable – the universe in which you live.

Chapter 2. The Time Before Time
A world made from strings
Loop over loop
Reborn from nothing
Nothing but theories?

Chapter 3. The Big Bang
The 0 hour
The laws of physics begin
The world – a soccer ball
The first particles
All of the forces are already there
The next round of extinction

Chapter 5. The Life and Death of Stars
Too small: brown dwarfs
The Joe Six-Pack of the universe: red dwarfs
The Sun’s relatives: main-sequence stars
The future of the Sun: white dwarf
Extremely dense: neutron stars
The odd balls: quark stars
Where space and time are meaningless: black holes
Even stranger: exotic stars
How large can stars be? The hyper-giants

Chapter 6. The Planets
Our home: The Solar System
Life-giving: the Sun
The closest to the Sun: Mercury
The most like Earth: Venus
The blue planet: Earth
The red planet: Mars
An unfinished work: the Asteroid Belt
Holding everything together: Jupiter
The lord of the Rings: Saturn
The icy one: Uranus
Another blue planet: Neptune
Way out there: the Kuiper Belt
The garbage dump: the Oort Cloud
The extraterrestrials: exoplanets
The mavericks: planemos

Chapter 7. The End of the Universe
Death by freezing
Death by tearing apart
Death by being crunched
Death by annihilation
Death by disintegration
Death by solidification
One cross each!
The future biography of the universe
Imprint

About the author: Matthias Matting, born 1966, is a physicist and journalist. For his eBook "Travel to Fukushima" he received the first german eBook price. In 2011, he was the official bestselling author at Amazon Germany. He's working in the science & technology department of the german news magazine FOCUS. Since five years he authors the weekly gadget review video series "Mattings Warentest" at FOCUS.de.